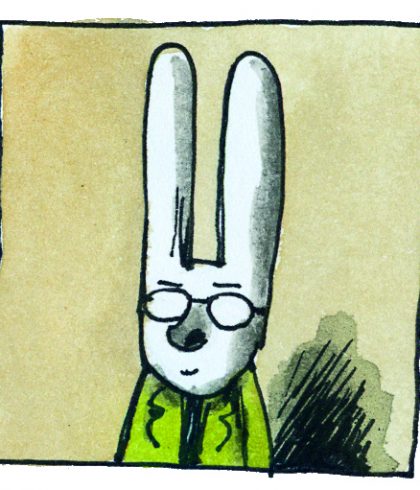 "In Buenos Aires there was a viceroy named Liniers, who ended up being executed by firing squad. He was my ancestor, something like a greatgreatgreatgrandfather. So when I began to sign my comic strips, I used the name." With almost 1 million followers on Facebook, Ricardo Liniers Siri is one of the most popular Argentinian cartoonists of all time.

Born in Argentina in 1973, Ricardo Liniers Siri (a.k.a. Liniers) started his artistic career making fanzines for his friends when he realized we was not made for law school.

He is the creator of the daily strip Macanudo and graphic novels for younger readers, including the Eisner Award-winning Good Night, Planet. For the last 16 years, Liniers has been writing and drawing Macanudo, which has been published daily in Argentina by La Nación since 2002 and as English-language collections in the United States since 2014. Macanudo is also published in El Pais (Spain), El Tiempo (Colombia), HoyxHoy (Chile) and debuted in the US market on September 2018 trough a partnership with Hearst-owned King Features Syndicate. It has grown to be one of the most celebrated cartoon strips in South America, and Liniers has become one of the continent’s most popular cartoonists. Liniers won the Inkpot Award for career achievement in 2018.

Together with his wife Angie he founded Editorial Común with the aim of publishing graphic novel by local and foreign authors.

He has more than 30 books published, many of which have been translated to English, French, Italian, Czech, German, Portuguese, Korean and Chinese.

He has toured Latin America and Spain with his friend, musician Kevin Johansen, drawing on stage while Kevin’s band performs.

He performs stand up comedy with his friend and colleague, Chilean artist Alberto Montt.

He has illustrated 5 covers of The New Yorker magazine.