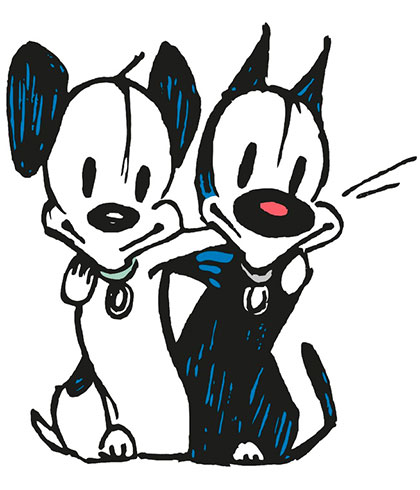 In 1994 Patrick McDonnell created the comic strip MUTTS, which now appears in over 700 newspapers in 20 countries. MUTTS has been described by Peanuts creator Charles Schulz as “One of the best comic strips of all time.” McDonnell has received numerous awards for this strip, including the National Cartoonists Society’s highest honor, The Reuben, for Cartoonist of the Year; five Harvey Awards for Best Comic Strip; Germany’s Max and Moritz Award for Best International Comic Strip; and the Swedish Academy of Comic Art’s Adamson Statuette. MUTTS has also won awards for its environmental and animal advocacy: two Genesis Awards from The Ark Trust, The HSUS Hollywood Genesis Award for Ongoing Commitment, the PETA Humanitarian Award, and a Sierra Club award.

The MUTTS cartoons have been published in 22 compilation books in the U.S. and in numerous collections throughout the world. In 2003, fine art publisher Harry N. Abrams published MUTTS: The Comic Art of Patrick McDonnell, a monograph on McDonnell’s career. In 2007, The Best of MUTTS was released containing a decade of McDonnell’s favorite strips along with insightful commentary. Available in 2008, Shelter Stories: Love. Guaranteed features his popular animal shelter–themed strips accompanied by real-life pet adoption stories submitted by readers worldwide. In 2009, McDonnell collaborated with The Power of Now author Eckhart Tolle to create Guardians of Being.

In 2005, McDonnell embarked on a children’s book career. His first children’s book The Gift of Nothing quickly became a New York Times Best Seller. Art (2006), his second release, told the story of a boy named Art who makes art. His next release, Just Like Heaven (2006), heralding the joys of simple blessings, was hailed in a starred review by Kirkus as “a meditation on the true nature of miracles.” In 2007 McDonnell again returned to the New York Times Best Seller list with Hug Time, featuring a kitten named Jules who goes around the world hugging endangered species. Since then, he has produced two additional childrens books (South and Wag!) along with the 2012 Caldecott Honor winner Me…Jane, a biography about the young Jane Goodall, and The Monsters’ Monster.

McDonnell is involved with many animal and environmental charities, and is a member of the board of directors for both the HSUS and the Fund for Animals. His characters have been enlisted by the U.S. Marines for their 2006 Toys for Tots holiday poster, the American Library Association’s 2007 “Read!” poster, and by the HSUS for their humane postage stamps. The MUTTS characters appear on the New Jersey Animal Friendly license plates that fund state pet population programs. The 2007-2008 MAZDASPEED Team featured MUTTS-themed vehicles promoting pet adoption and the work of the HSUS.

Prior to creating MUTTS, McDonnell had a successful career as a freelance illustrator, drawing the Russell Baker Observer column for the New York Times Sunday Magazine from 1978-1993. He also created Bad Baby, a monthly comic strip for Parents Magazine, which ran for 10 years. During that time he also was a regular contributor to Sports Illustrated, Reader’s Digest, Forbes, Time, and many other national magazines. His work has been animated for television commercials, most notably a PSA for the New York Philharmonic. He is coauthor of Krazy Kat: The Comic Art of George Herriman, published in 1986 by Abrams.

McDonnell’s website, MUTTS.com, promotes his animal- and earth-friendly philosophy. Consistent with McDonnell’s concern for the environment, all of the MUTTS books are printed on recycled paper. He and his wife Karen O’Connell are vegetarian and happily reside with Amelie, their rescue Jack Russell terrier, and Not Ootie, their formerly feral cat.