DIY: The Do’s and Don’ts of crowdfunding your next project

Tom Richmond will be sharing his experience crowd-funding his new movie parody project “Claptrap” with Desmond Devlin on Indiegogo. Jake Parker will be sharing his pre-game strategy so that your crowdfunding campaign funds on the first day. They will be joined by Eric Moss and Jordan Plosky, the co-founders of a new crowdfunding service named Zoop.

Zoop is a full service crowdfunding solution that runs campaigns for comic book creators and publishers on its own streamlined platform that features an intuitive a la carte checkout system. Zoop fills a need for creators by handling pre-orders, printing and fulfillment for them so they can focus entirely on doing what they do best: create!

Frazz by Jef Mallett follows the adventures of an unexpected role model: an elementary-school janitor who’s also a Renaissance man. While he’s sweeping the hall, he’s whistling Beethoven. Or Lyle Lovett. He paints the woodwork in the classrooms; he paints a Da Vinci on the cafeteria wall. He’s a trusted authority figure who is every kid’s buddy. He took the janitor’s job while he was a struggling songwriter, and when he finally sold a hit song, he decided to stay on at school. Frazz appears in 200 newspapers worldwide, including the Los Angeles Times, Seattle Times, Chicago Tribune and Detroit News. “A few years back, I wrote and illustrated a children’s book,” says Mallett. “When I was traveling around reading it at school assemblies, I noticed that often, the most respected, best-liked grown-up in the building was the janitor. And I thought, ‘Hmm, there’s a comic strip in that.'” Often praised for its intelligent wit, gentle spirit and effortless diversity, Frazz won a Wilbur Award from the Religion Communicators Council in 2003 and 2005 for excellence in communicating values and ethics.

Join AMU’s Shena Wolf as she shines a spotlight on Tauhid Bondia’s interesting career journey to becoming a syndicated cartoonist. His feature, Crabgrass is a comic strip set in the early 80’s about what it means to be best friends during a time before cellphones, the internet and so-called “helicopter parenting”. If you ever wonder how you managed to survive your own childhood: Crabgrass remembers.

Tauhid Bondia lives in Hodgenvilke, KY and has created comics for over twenty years. Other features of his include A Problem Like Jamal, The Angry Dead, Good Ship Chronicles and more.

Live from the UK: The Lakes International Comic Art Festival’s opening gala event is a classic balloon debate featuring eight guests, each taking on the role of their own chosen comic character. At the end of the night, only one will survive, and that depends on how well they make their case to you, our audience.

In an intercontinental twist, some of the contestants will be joining live from NCSFest in America. And the whole thing will be lampooned live by master guest cartoonists Steve McGarry, Luke McGarry via satellite from LA and Boulet on stage at the Brewery Arts Centre in Kendal! Also joining in on the floating Friday comic art fun are Kate Charlesworth, Lou McKeever, Yomi Ayeni, Martin Rowson, Graham Dury, Tom Richmond, Marc Jackson and Bill Morrison!

As if that weren’t enough, the opening night will also feature the awarding of this year’s Sergio Aragonés International Award for Excellence in Comic Art and some other exciting announcements, including the presentation of the NCS Division Awards for Graphic Novel and Comic Book.

Pass the Panel reveals the speed, style and sheer imagination of our incredibly talented artists drawn from across the world. Taking turns, each artist has drawn a page of a new comic story, passing from one to the next until the story is complete. Directed and organized by Luke McGarry

The Power of Political Cartoons

We’ve got a team of some of Britain’s greatest living satirical cartoonists on stage in Kendal, as well as two leading exponents joining live from the USA. Together they’ll be talking about their methods and showing their skills with live drawing based on the day’s events.

FROM THE UK: Martin Rowson and Lou McKeever. FROM THE US: Pulitzer-prize winning cartoonists Ann Telnaes and Mike Luckovich.

So you failed at cartooning! Settling for a career in animation

Join Mike Hollingsworth and Pete Michels as they sit down with award-winning cartoon voice actor, Alicyn Packard to discuss their journey from aspiring to be newspaper and magazine cartoonists, to working on the biggest properties in animation today. Mike and Pete answer questions like “If you met cartoonists who were interested in going from cartooning to animation what advice would you give them?” This is a funny, wide-ranging and informative chat not to be missed!

Mike Hollingsworth​ is the Supervising Director of BoJack Horseman, ​Season 1 of Tuca and Bertie and now an Executive Producer over at Netflix Animation.

​Alicyn ​Packard​ is ​a veteran voice actor having lent her voice to a myriad of projects for television, radio, film & web. Nominated for four Voice Arts Awards for excellence in voiceover, and a BTVA Award for “Best Female Lead Vocal Performance,” she can be heard daily bringing to life over a dozen popular animated characters​, like “Rugrats”(Josh) as well as “The Tom and Jerry Show” (Toodles), seasons 1 & 2 of in the hit Disney XD series and theatrical movie “YoKai-Watch” (Jibanyan, Komajiro, Nate’s Mom), NBC/Sprout’s “Space Racers” (Robyn) “Poppy Cat” (Alma), “The Mr. Men Show” (Sunshine, Naughty & Whoops) and more.

70 Years of Dennis the Menace

2021 marks the 70th anniversary of one of the most amazing coincidences in the history of comics. In March, 1951, readers on either side of the Atlantic were introduced to two identically-named, yet dramatically different little boys who would soon find their way into the hearts of millions. Join the stateside team of Marcus Hamilton, Ron Ferdinand and Scott Ketcham, and transplanted Brit Joe McGarry, to discover the story of the two Dennis the Menaces.

Join Ed Steckley, Jason Chatfield and Joe Wos as they take you into their studios to share their Wacom Workflows. Showcasing the latest interactive drawing tablet technology, three cartoonists show how very different every artist works.

Scott Shaw presents a collection of the craziest comic books ever published!

Join AMU’s Shena Wolf as she shines a spotlight on Steenz’s career as a cartoonist, editor, professor and all-around comic arts entrepreneur. Steenz took over writing and drawing the wildly popular syndicated strip, “Heart of the City” in April 2020 from 2020 Reuben Nominee Mark Tatulli, who created the feature in November 1998.

The strip centers around Heart, a girl with big dreams and a love of drama. She lives with her mom, Addy, in Philadelphia, and has always had the support of her best friends Dean and Kat. Heart of the City follows Heart into a new phase of her life, filled with new challenges, new milestones, new friends and new adventures.

A Conversation with Mike Mignola and Karen Green

Mike Mignola, comic artist and writer behind the award-winning Dark Horse Comics series Hellboy, discusses some of his favorite pieces, providing viewers a look into his dark, spectral perspective.

He is joined by Karen Green, Curator for Comics and Cartoons at Columbia University. 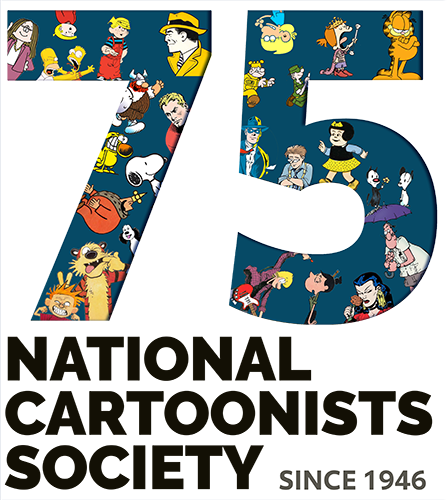 Join us as we remember our friends we lost this past year, Mort Gerberg is awarded the Gold Key award and inducted into the NCS Hall of Fame, Garry Trudeau is awarded the Gold T-Square, the Milt Caniff Lifetime Achievement Award is accepted, and we announce the winners of Division Awards and the 75th annual Reuben Award!

Watch the whole series of videos on this page or check out the individual awards here!

We thank all of our sponsors and supporters of NCSFest 2021, and especially all of our loyal and talented membership. We wouldn’t be able to do any of this without you. Thank you for your ongoing support during this time.

Presented in Association With:

Stay Up to Date

By providing your phone number and email address, you consent to receive messages from the National Cartoonists Society and NCSFest.